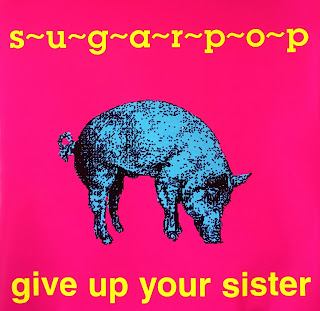 J-Bird Records was an early online music hub. As Roger Catlin wrote in a 1996 Hartford Courant article:
"J-Bird Records, which operates out of Wilton, is likely the first wholly inclusive label -- signing bands, designing products, manufacturing CDs and marketing them in a virtual store whose number of titles, like the Web itself, will be unlimited."

It was an era in which people were excited by the "web's" unlimited potential rather than terrified of it. How quaint!

Arguably the finest release in the J-Bird catalogue is Sugarpop's "Give Up Your Sister". A tip for 90's/ early 2000's music conoisseurs: if a band's name is a combination of "sugar" and another word, it is probably pretty good. Sugarpop, Sugarbomb, Sugarcult, Sugarspoon, Sugartooth...all really good bands! I am even quite partial to Sugar Ray (c. "Every Morning"). Oh, and wasn't the inimitable Icelandic vocalist Bjork originally in a band called the Sugarcubes? I think it's a pretty solid rule.

Allmusic appears to stick the "power pop" label on this album, but I don't completely agree. Yes, it is melodic, but it doesn't quite fit the mould. More accurate are reviewer Andy Hinds' Nirvana comparisons (https://www.allmusic.com/album/give-up-your-sister). The similarities are especially apparent on tracks like "Cigarette", where the vocal delivery bears an uncanny resemblance to Kurt Cobain. Forunately (and unlike so many others), Sugarpop understand what made Cobain such a great vocalist and songwriter, so the similarities are welcome. "Dashboard Hula Girl" seems to recall Beck with its spare arrangement, wiry slide guitar, and danceable drum beat. In fact, the entire album seems permeated by the kind of off-kilter pop sensibilities Beck pioneered on 1994's "Mellow Gold".

The album's high point comes at track 6: "Downtown". Their many influences coalesce into something unique and arresting--a perfect 2-or-so minute pop song you'll be singing all day!

Unfortunately, media samples are scarce, and the album doesn't appear to be on Spotify or iTunes. Use the Allmusic review page as your source for audio clips if you want to know if this album is for you, and then seek out used copies on CD.